Within the context of heightened scandal and controversy surrounding the Catholic Church in recent months, not least the contentious issue of the Pope’s visit to the United Kingdom, Geoffrey Robertson’s talk on the Church in relation to human rights abuses was topical to say the least. The case of the Pope: Vatican Accountability for Human Rights Abuse held in front of a jam-packed audience at the London School of Economics certainly cut through a rather cold, wet September evening to produce a very heated discussion about religion and rights.

A colossus in the legal world, Geoffrey Robertson QC is no stranger to successfully tackling some of the biggest human rights abuses of recent times. Founder and head of Doughty Street Chambers, the largest human rights practise in the UK, we were certainly in the hands of an expert. The object of the talk was to explain how the Vatican has been corrupted by the powers and pretensions that accompany statehood, and how it has contributed to, in Robertson’s words, ‘one of the greatest human rights horrors of our time.’

‘I’m not an atheist, I’m a lawyer. I can see both sides of every argument.’ So began Robertson’s at times funny, at times moving, speech on, as he liked to put it, ‘the curious case of the pope in the daytime.’ Despite Robertson’s great skill as an orator, the facts certainly spoke for themselves. In the United States alone, the Church has paid out 1.6 billion dollars in damages, and research conducted by Catholic bishops in America found that 10,600 children had been sodomised or had been masturbated by priests. 5.3% of American priests were found to be child molesters, 22% of the victims had been under the age of eleven, and most shockingly, 76% of credible allegations had failed to reach the police or law enforcers. Robertson had no qualms in expressing that he would place the blame on the entrenched traditions of the Catholic Church, which, with its adherence to celibacy and rejection of masturbation, has resulted in a worrying trend of deeply lonely, sexually frustrated men within the Church.

Robertson continued to open up and expose the infrastructure of the Vatican, namely, its obsession with Canon Law and Secrecy. Canon law has two striking features; the need for complete secrecy and the lack of sympathy or compensation to victims. Under Canon Law trials are conducted by priests, without any cross-examination, DNA tests or medical examinations, which seem preposterously unfair when considering the nature of the offences. Everyone is sworn to secrecy on pain of excommunication, and the only punishment delivered is that of a penance – to pray for the victim. Robertson also criticised Pope Benedict himself, his tenure as being Cardinal Ratzinger shadowed by covering up grave atrocities and his rejection of suggestions that he should impose a rule of zero tolerance to paedophilia and suggestions of automatic de-frocking in some cases. 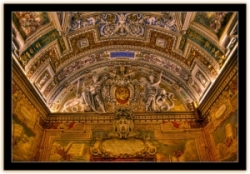 Thanks to Giorgos~ (via CC licence) flickr.com

The real bee in Robertson’s bonnet though, was the idea of the Vatican as a state, and the way in which the Holy See has exploited its position within the United Nations. The history of the statehood of the Vatican provided a fascinating trip back into history, with Mussolini’s fascism and Ronald Reagan’s hatred of communism appearing along the way. Whilst seriously failing to meet the official definition of a state as laid out in the Montevideo Convention (the Vatican has no citizens!) perhaps the Vatican’s more monumental breach of statehood was in relation to the UN human rights conventions. The first one regarding torture was a humorous one, with the Vatican reserving the right to torture in hell, the second one, the convention on the rights of the child was a far more chilling breach. As Robertson put it, it is a strange sort of Christianity that encourages doctors to report women who have self-administered abortions to the authorities, but will not report paedophiles.

Robertson was certainly well-received by the audience; the talk ended in thundering applause and the speech peppered with both gasps and laughs alike. However, despite his ability to make the audience laugh uproariously even in the context of something so serious, at times his humour felt ill-judged and inappropriate. When talking about the Pope visiting this country, Robertson seemed to poke fun at him, coming across in his ‘flying pope-mobile’ and then having to duck into his special ‘pope-toilet’ to quickly change his attire. On a visual level, his statehood was ‘ridiculous’ according to Robertson. Whilst he had stated at the start of the talk that he did not wish to criticise the Catholic faith and realised how much joy and comfort it offered millions of people, by the end of the talk he seemed to make a nifty U-turn proclaiming that he made ‘no excuse for criticising the Catholic Church’. I couldn’t help but think that this undermined his talk somewhat by reverting to snide digs for cheap laughs. Certainly he managed to raise a few temperatures in the room when it came to question time, with one man asking Robertson whether he was ‘profoundly ignorant of the issues’ or just ‘lying through his teeth’, which provoked a small but powerful round of applause from the audience.

Overall, Robertson was a charming and popular speaker, at great ease with his audience, and managed to succinctly get the facts across as well as entertaining his audience. Whilst he ended his speech with the idea that the Vatican should forswear its statehood and submit its leader to the rule of law, it was left to a question from the audience on how you would go about actually prosecuting the pope. His answer, involving a country with universal jurisdiction, (not this one unfortunately, but possibly Germany – interestingly enough the pope’s home country) article 27 of the Rome Statute of the ICC and the doctrine of ‘command responsibility’, could have been spoken about in greater detail. Yet as Robertson ended, the very fact that this pope or the next pope might be liable to prosecution under the development of international criminal law, should on its own prove to have a useful deterring effect. Let’s hope so.

Felicity is currently studying the GDL at City.